Harold is a Chaplain serving the Contra Costa County Detention Facilities in the East Bay Area.

Chaplain Harold Albert came from a Jewish background and attended Hebrew school as a boy. However, persecution and prejudice from neighborhood bullies because he was Jewish made life difficult. 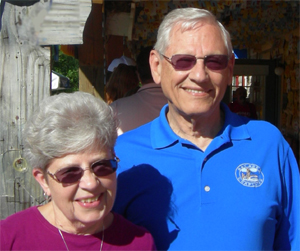 About age nine, blaming God for the misery in his life, Harold decided he would be much better off without God. He dropped out of Hebrew school and decided not to tell anyone he was a Jew.

During high school, various friends would invite him to church. Generally, Harold would turn them down using his Jewish background as the excuse. Eventually, he accepted an invitation, and, although he didn’t follow through and actually attend, he had crossed a huge mental and emotional barrier.

Six months later, he did attend a church party and then went to an evening service. During that church service, the pastor gave an invitation. Harold went forward, received Christ, and his life was changed forever. Despite his father’s angry objections, Harold continued enthusiastically attending every church service throughout the week.

Later, while Harold was in college preparing for the ministry, a new pastor was called to Harold’s church. The pastor had a lovely daughter named Dorothy who caught Harold’s eye. Dorothy, having been raised in a Christian family, had heard the gospel from birth, and she had received Christ in her early teens. She noticed Harold’s attention, and, five years later, they were married.

Harold’s commitment to ministry was strong and enthusiastic. While in college, he served as President of the So. Cal. Regular Baptist Youth Association. After earning his B.A. and B.Th., he served for 17 years with Fellowship of Baptists for Home Missions as a church planter. He pastored five churches, three as the founding pastor.

In 1982, Harold became the Administrator of Development at Denver Baptist Bible College. Over the next 13 years he was Vice President at Miami Christian College, Academic Dean at Hollywood Christian School, and the administrator of another Christian school.

In 1995, he earned his M. Ed. in Administration from Liberty University. That same year he moved to California to become the Executive Director of Western Baptist Home Mission.

In 2009, Harold became the founding chaplain of Bay Area Chaplains. He and his wife, Dorothy, celebrated their fiftieth wedding anniversary in 2007 by taking a trip to Italy. They have two children and two grandchildren.