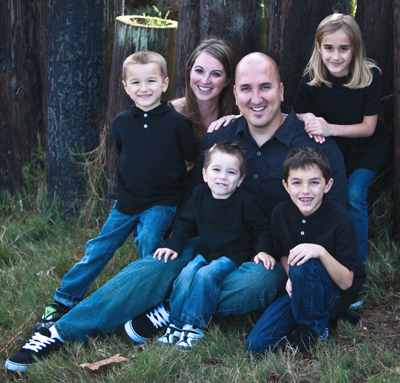 Bryan and Vicki Ferretti were born and raised mainly in Pacifica, CA and have been friends since 6th grade.

Vicki moved from California to Oregon during junior high and they lost touch for a couple of years, but the summer after they both received Christ, they began to build their friendship again, and eventually started moving toward marriage.They have enjoyed 14 years of marriage so far and have 4 children.

Bryan and Vicki were both saved in 1989. Bryan’s journey to salvation began when a neighbor, who was a Christian, befriended him and took Bryan to church where he heard the gospel for the first time.

The youth pastor there began to mentor Bryan and model the gospel of Jesus Christ before him. It was during a summer camp where the speaker talked about the Lordship of Christ and what it meant to repent and rest in the finished work of Christ that Bryan surrendered his heart to God.

Because God had changed Bryan in such a dramatic way and because the gospel was so real to him, he wanted to tell others about it. He held a Bible study on his high school campus, served on mission trips, and enjoyed ministering to others and growing in his knowledge of God and theology.

Vicki was on a mission trip with the church she was attending, intending to share the gospel with the people in Mexico, when God made evident His plan for the trip and her life. As she listened to a Mexican girl give her testimony, God penetrated Vicki’s heart with the gospel and she too was saved.

However, Bryan and his co-planters were convicted by the Holy Spirit that they needed to change from the self-righteous, works-centered message they were teaching and modeling and instead embrace and teach the all-sufficient power of Christ alone for salvation and sanctification.This shift led to a re-planting of the church as “Vintage Grace Church” in Pacifica.

The Ferretti family feels privileged to be called back to their hometown to serve God by planting a church there. They have a heart for the people of Pacifica and want to serve and model Christ, ministering to those who have no knowledge of the gospel. Their desire is to plant a missional/gospel-centered, culturally relevant church where people would be genuinely excited to bring their co-workers, neighbors, and friends. The purpose for this church is to embody the life of Jesus Christ in a community where the gospel of grace is seen in action, heard through preaching, and where everyone experiences new life through it.

They are praising the Lord that He has given them many opportunities to build relationships with people and reach out to their community, provided a facility where the church can meet, and begun building leadership in the church as men and women are being trained and taking on leadership roles.