Pastor Jeff Locke is a Southern California native who has helped plant churches in New York City and San Francisco. Jeff was raised in a Christian home. He grew up in church and Christian school but God did not really get a hold of him until he moved to New York and became involved in a small church plant in Brooklyn. 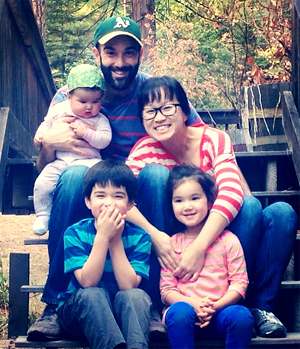 It was through the clear gospel witness of that community and the investment of godly men and women in his life that he came to understand for the ï¬rst time what it meant to live as a disciple of Jesus, giving all areas of his life to him. Shortly thereafter, he was called to ministry.

Early in life he didn’t want anything to do with ministry. He believed ministry was for people who “couldn’t make it in the real world.” That changed when he gained a “gospel-centered” picture of life and ministry at the church plant in Brooklyn. The pastor and leaders of that church saw God’s call in his life and he experienced an internal sense of a call to minister in January 2006. The following year, He enrolled in seminary at Westminster in California.

Since God used that church plant so mightily in his life, he felt called to church planting. This was afï¬rmed while he served as a part of the planting team and staff of Christ Church in San Francisco.

In 2013 Jeff planted Grace Alameda. Their mission is to make disciples to the glory of God and the good of the city by building our ministry around three key biblical truths: God’s grace (the gospel), to us (the community), for the world (the mission).

He and his wife, Kathy, have been married since 2006 and have three children, Jonas, Penny, and Emma. He loves Alameda, coffee, rock music, anything French, and relaxing with a good novel.