Mark has been church-planting in South Africa for almost eight years and is currently heading up the Church Ministries Institute in Cape Town as well as pastoring a newly formed church. 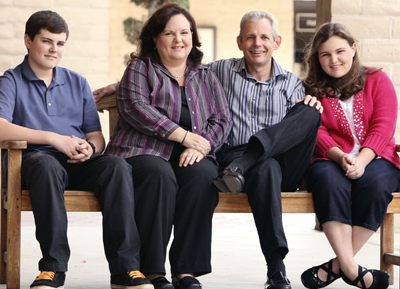 God introduced Himself to Mark through the U.S. Air Force. Mark enlisted at the age of 18, searching for personal satisfaction.

The Air Force didn’t provide that, but one day while waiting for a flight to a new assignment, Mark began a conversation with someone reading a Bible, asking him if he believed what he read.

Like Philip with the Ethiopian on the road to Gaza in Acts 8, this new friend explained the truth of God’s Word, the content of the gospel, and the impact that it could have on Mark.

Confronted with owning his sinfulness, Mark embraced God’s grace and was saved. The new friend discipled Mark and brought him to church where Mark grew under the ministry of the pastor. When he completed his service in the Air Force, Mark enrolled in Spurgeon Baptist Bible College in Florida to pursue full-time ministry.

Debbie was born in Rhodesia, which is now Zimbabwe. During a class in religious instruction at a public elementary school, Debbie heard a presentation of the gospel. The teacher challenged the class with the fact of sin and encouraged each to surrender his or her life to Christ. Debbie invited Christ into her life.

Two years later, due to the threat of civil war, Debbie’s family moved to South Africa. There they found a good church, and Debbie grew in the Lord during her teen years.

Spurgeon Baptist Bible College in Florida was also Debbie’s choice for college. God drew Mark and Debbie together as a couple and began to lead them towards full-time ministry. They were married in 1987 at Debbie’s home church in Newcastle, South Africa, and Mark was invited to be an associate pastor there. There God solidified the call to South Africa in their hearts.

In 1995, Mark and Debbie began their church planting ministry in Cape Town, assisting a veteran missionary couple. Working together, their church grew from 70 to 120 members, and church leadership was developed. A church training institute was also begun at this time, eventually developing into today’s Shepherds School of Theology and Expository Preaching (SSTEP), which offers a B.Th. program through Potchefstroom University.

In 2001, Mark and Debbie started Living Hope Bible Church in Cape Town. What began with five people and a weekly Bible study has developed into a church with nearly 70 people.

Living Hope Bible Church continues to grow and mature. The church’s first elder board and deaconate have been established and are growing in their maturity to be self-governing, so Mark and Debbie are making plans to begin planting a new church in the near future.