Carlos is President of MEDA in Honduras and an Elder at Betania Baptist Church in Honduras.

In December 2022, another 10 men will graduate from MEDA, making a total of 123 men from eight latin american countries who have graduated since the seminary began in 2008.  In addition to the seminary, MEDA has provide weekend conferences.  Those were shut down during Covid, but started up again in 2022 with one pastoral conference attended by about 170 men and one women's ministry conference attended by over 200 women.  In addition, MEDA has begun traveling conferences where the MEDA speaker travels to a location where a previous graduate hosts the conference.  This brings training to latin american churches and brings awareness of MEDA training to a wider audience.  At Betania church, pastor Raul has encountered severe health problems with his liver and has seemed near his deathbed a couple of times.  So far he has recovered to some degree each time, but is still too weak to preach.  Carlos is taking some of the preaching responsibilities.  Throughout the time of Covid, attendance at Betania has grown a little.  People who wanted to participate in church during Covid connected with Betania when their respective churches stopped because meeting in person was not allowed.  Betania was able to find ways to continue church ministry during Covid and people from closed churches were able to attend at Betania.

Carlos was raised in a Christian home. His parents were missionaries, involved in radio ministry in Bonaire, a Caribbean island. His father, Samuel Montoya, was the Spanish voice for the J. Vernon McGee radio ministry. 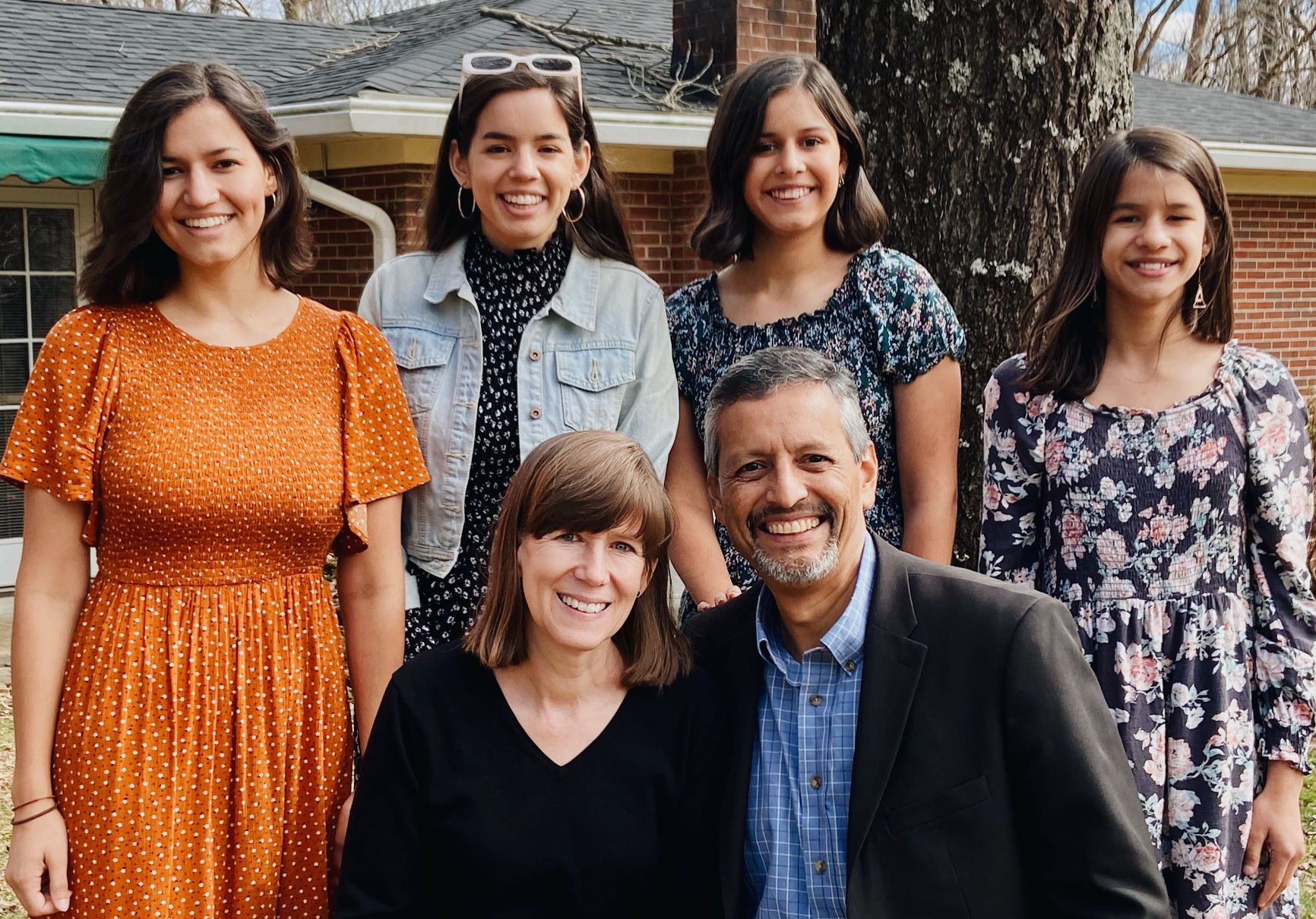 Despite the advantage of consistently hearing good teaching as a child and frequently renewing his commitment of faith, by the time he was an older teenager, he was living hypocritically – saying one thing, but allowing friends and pleasures to control his life.

It was in college that several fellow students, who were active in the Fellowship of Christian Athletes, confronted him with awareness that freedom in Christ is freedom to love and obey Christ by God’s grace. He felt God challenge him to decide whether he was truly going to serve God or himself.

After Carlos left for college and got serious about following Christ, he remembered a godly young woman, Lori, whom he had first met in his church youth group in North Carolina. While Carlos was at Chapel Hill pursuing a degree in Computer Science and watching Michael Jordan play college basketball, Lori finished high school and then attended Bryan College in Tennessee. They maintained a long distance relationship.

After Chapel Hill, Carlos moved on to Dallas Seminary for a Masters in Biblical Studies. Two years later, in 1989, when he graduated from Dallas, and Lori graduated from Bryan, they got married and began to work and pay off school loans.

Carlos went to work for U.S. Airways using his computer skills and became involved in the local church. He participated in outreach to international students and also preached in a small rural church.

During this seven year period, these ministries showed him that his lack of Greek and Hebrew language, knowledge, and skills, was limiting his ability to preach and teach the Bible. He had investigated acquiring those language skills at The Master’s Seminary a couple years after they were married, but costs prevented him from attending then.

A trip to Romania in 1995 provided a missions experience for the family. Then, in 1997, Carlos got a transfer to Los Angeles with U.S. Airways and began to attend The Master’s Seminary for his training in biblical languages. Three years later, after finishing at Master’s, the family began looking for where God wanted them to serve.

A friend of the family referred Carlos to MEDA (Ministerios Evangelicos De las Americas) in Honduras. The facilities had been built in 1998, and the school was inaugurated in 2000. January 2001 saw the Montoya family in Honduras.

In 2002, they began their conference ministry that grew to reach approximately one hundred pastors and church leaders each month.  In 2020, Covid shut down the conference ministry until 2022 when it transitioned to one larger pastoral conference and one large women's ministry conference (over 200 attended in 2022) each year.  These central conferences are now supplemented with several conferences each year where the speaker travels to a location where there is a MEDA graduate to host the conference.  This provides broader exposure of MEDA teaching to more people.  There have been regional conferences in Ecuador, El Salvador, Colombia and other locations.  In 2006, the school officially became a seminary called SEPE (Seminary for Expository Preaching), and the first graduation was held in December 2008.  With the December 2022 graduation of 10 more men, an aggregate total of 123 will have graduated since 2008.

Carlos serves as president of MEDA, as well as a professor. He and Lori have seven children.  Four are married.  A fifth gets married in January 2023.  The remaining two are in high school.