Ray is planting a church in Hawaii.

Ray became a Christian at a youth camp when he was a junior in high school. He had heard the gospel previously, but during this camp, the Lordship of Christ was presented in such a compelling way that Ray knew the right thing to do was to worship and obey the Creator and to submit totally to a relationship with Christ. 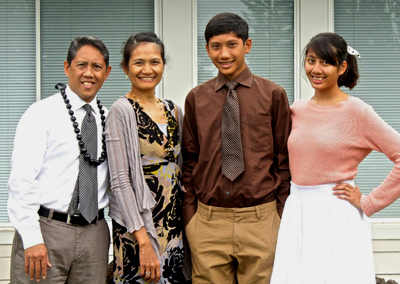 Soon after that, Ray and his siblings started their own home Bible study, completely independent of any church.

As a college student, Ray continued working with high school students and other youth, a pattern that has continued for about 25 years.

Eventually, Ray founded Community Bible Church (CBC) and his home Bible study and youth ministry became part of that church’s ministry. Ray eventually became the full time youth pastor at CBC, where he worked for the last 17 of his 25 years of youth ministry.

About five years ago, a friend challenged Ray to begin praying about starting a ministry in Hawaii, where Ray had been born. During four years of praying about it, God was preparing a variety of circumstances to enable His answer.

God was also preparing other people to take the place of Ray and the others in the ministry at CBC. The church and the pastors at CBC affirmed God’s call on Ray for this new ministry. On August 4th, 2009, after four-and-a-half years of prayer, a team of four families moved to Hawaii, found housing and new jobs, and started a home Bible study as a precursor to a new church.

As of June 2010, there are up to 35 youth and adults attending the weekly home Bible study. Plans are in progress to start a ladies ministry and a discipleship program. The team has focused on making contacts, getting to know people, building relationships, evangelizing, and teaching.

God has provided jobs for the team in the areas of teaching, IT, civil engineering, and in retail.